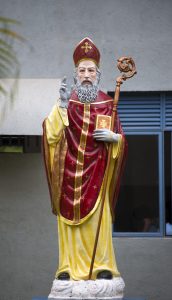 The first school of St. Nicholas’ International College was established in the commercial capital of Sri Lanka – Colombo. However, the church hierarchy felt a greater need for an international school in Negombo, where the Catholic Population was denser than in other cities along the western coastal belt. Therefore, the Chairman of St. Nicholas’ Education Services Limited, the then Archbishop of Colombo Most Reverend Dr. Oswald Gomis decided to set up a branch school in Negombo with the name St. Nicholas’ International College, Negombo.
St. Nicholas’ International College Negombo was established in Negombo in a small house rented at No.74, Jayarathna Road, Katuwapitiya, with Mr. Anton Perera giving leadership to this infant college as Principal. His wife Mrs. Christine Perera served as the Secretary and Administrative Officer. The first academic team comprised of a Head Teacher named Mrs.Chinthika Kalasiri and five newly recruited teachers who were recruited to the college with effect from 01st June 2003, and St.Nicholas’ International College Negombo was declared open with 54 students on 06th of June 2003.
As soon the school commenced operations at Katuwapitiya, plans for a more spacious and planned building also went to the drawing boards, and on 15th August 2003 , the foundation stone was laid for the present school at the Nelumpitiya church premises by His grace the Archbishop of Colombo and Chairman of St. Nicholas Education Services Dr. Oswarld Gomis, with Mr. Jagath Alwis the deputy chairman of Ceylinco Insurance, Rev. Fr. Neil Dias Karunaratne, Director of St.Nicholas’ education service Limited and a host of distinguished guests gracing this historic occasion.
The first classrooms for Primary I – V were started in September 2003. The houses of the college were named after the Archbishops of Colombo as Nicholas, Thomas and Oswald.

The principals of the college have been as follows:-

The school had a transition in her administration with the Church Authorities taking charge of the college with effect from 2nd September 2013.